I get so tired of all this negative chatter that tries to give most meats, especially red meat, a bad name. I wish a lot of these vegetarian fanatics and red-meat-haters would just stop and think about a few things, before blaming the majority of diseases and disorders on meat!

A few moments ago, I was doing a quick web search about red meat - just to see if all the debate has calmed down over the years. Nope! It was in full swing! Some of these people were referring to red meat like it was a poison and pretty much had a formula "Red Meat = Death." WTF? At the same time, for the ones who weren't vegetarian, they was acting like eating chicken is superior to beef, and so on. Okay, lets get this straight: For one, I enjoy eating all different types of meat. But, unless you're raising your own livestock or fish, do you really know what they eat and/or what they're injected with? To down the cow and praise a chicken that is being raised in mass production, is a little absurd, if ya ask me. As much as I love to devour a plate full of hot wings, baked chicken legs, and use chicken eggs for a good protein source, I do realize that a chicken is a very nasty animal that will eat about anything it can get down its throat; much like a pig (and we all know how swine gets a bad name). A cow, on the other hand, basically eats grain, fresh grass, hay, etc.

I have no problem with vegetarians or people who don't believe in eating meat, but lets don't start blaming meat for the reason some people are in bad health......

Here's what the main problem is (in my opinion) and the reason why a lot of research points to certain types of meat as being the reason for health problems:

What's in it? This is what many people forget. How many hormones, antibiotics, and other drugs has the animal been subjected to in order to speed up growth and production? Yeah, it seems to me that the chemicals and drugs and all that other crazy crap that is hard to pronounce when reading the ingredients on the food labels, is what may be killing people the most.

Processed meats? Okay, a lot of processed meats contain red meat along with white meat, but processed foods such as bologna, hot dogs, beef jerky, and so on, contain sodium nitrites and other unhealthy, risky additives. Speaking of bologna, hot dogs, vienna sausages, potted meat, etc.: I'm still not sure exactly what all in the hell is in there. I mean really, some of this junk tastes good, but anytime I read the words "Mechanically Separated Chicken, Beef, Pork," I'm like, "uh, oh shit!" Your guess is good as mine. Hell, who knows, you may have ate some very exotic meat in those hot dogs for all you know. Ha-ha! Just kidding, well, I hope I was...

Do you trim the fat off your steak? This may very well be a good reason why meat gets a bad rep. Are you one of those who orders or cooks a big rib-eye steak and upon finishing your meal, all you see is a little juice on the plate and nothing else? Damn! It might be a good idea to trim the pure fat chunks and strips off the steak, wouldn't ya say? To me, eating freshly cut steak as opposed to hamburger steak that has already been pattied up, not only gives you a more primal feel when eating the blissful flesh that is full of body building protein and nutrients, it also allows you to have more control over how much of the fat you want to ingest - unlike the hamburger patties or steaks that already have the fat that you'd normally trim, all mixed up with the lean meat.

Eat a lot of sausage and burgers? This is one thing I can't take up for, when it comes to the defense of red meat, pork or beef. If you eat a lot of sausage (the good ol' tasty swine) or a lot of hamburgers (the good ol' American meal), you are getting a mix of all that tasty, unhealthy fat that has literally been run through the mill or grinder to blend the lean cuts with the lard. I've made 'em both, back when I was a butcher. I also enjoy consuming both of these, but at least I know that it is not the most healthy thing I can ingest. You should see somebody make sausage, for example. I still remember adding what appeared to be nearly half lard into the meat tray with lean cuts of pork, running it through the grinder a couple times and presto, all that lard is now blended in with the sausage. Although hamburger meat is leaner than pork sausage, a similar ratio is applied - often 73 lean/27 fat or 80/20 is usually the leanest for the typical burger, which is still a lot of fat per ounce.

Do you burn your meats? This is not good at all for your intestinal and/or colon health. When you burn and overcook your meat, it alters the molecular structures in the meat and can release harmful free radicals, blah-blah, and whatever, that can have a negative impact on your digestive tract. Also, even though I know it's fun and tasty, grilling your food on a charcoal grill is also suppose to be bad on your colon, and whatnot. Hey, if you want to grill, I say grill. Quit worrying about everything and live a little, but I'm just saying it might not be a good idea to grill out with charcoal ALL THE TIME or burn your meats on a regular basis.

Do you just mostly eat meat? If so, this is definitely not a wise choice unless you're living off seafood or something - and even if so, you still need other types of food. I think meat also gets blamed a lot for the ones who come down with ailments due to their body being too acidic. If all you eat is chicken, beef, and pork and consume very little fruits, grains, and vegetables, of course you are not doing your body a favor. With that type of eating habits, no wonder these people are always blaming the meat!

Bottom line: When it comes to meat, the best bet is farm-raised, organic, lean cuts and reasonable-sized servings with somewhat of a balanced diet. Some people don't consider fish a meat (why they don't, I'm yet to figure out), but it is an extremely healthy choice that is loaded with Omega-3 fatty acids. Oh, and to finish my defense for beef consumption: it is loaded with balanced Amino Acids which is great for the protein seekers who need it to recover and build muscle from their workouts. Also, beef has B vitamins (especially B-12), a great source of iron, and contains a lot of selenium - which has been found to have anti-cancer properties in some studies. Red meat has also been thought to raise testosterone levels, which is a good thing for males or anyone trying to build muscle. However, I can't say for sure that the last tidbit has been proven without a doubt, but, due to the nutritional value of the common slab of lean beef, I'd say it is very possible. In addition to all of this, Taurine comes from a large variety of meats and seafood. If you're not aware about this particular amino acid, you may want to read the "Health Benefits of Taurine" blog post.

This particular blog entry reminds me of a blog post I did on another site of mine, a while back. It was called "The Optimal Caveman Diet - Foraging Hunter and Gatherer." 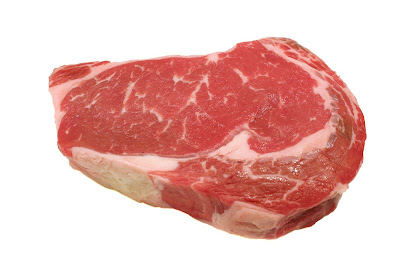 ---End of Post "Quit blaming the meat!"
Posted by Obscurely Diverse at 6:10 AM