I've heard about people taking Ginkgo biloba capsules, several years ago. In fact, I think I first run across this supplement about 16 years ago. Although, this extract from the Ginkgo biloba tree most likely has some positive effects on the body, the most touted claim for this substance is its ability to improve and preserve memory and possibly preventing dementia and Alzheimer's disease. These super marketing claims for enhanced cognitive function is what sells the pills, but by most studies I have read, they simply just aren't true and there is no clear-cut evidence to support these wild claims. Personally, in my opinion, when it comes to enhanced brain function, I think it is a big slop of pill-pushing herbal baloney.

Here are a few excerpts from Wikipedia:

---Ginkgo for dementia?
Extracts of Ginkgo leaves contain flavonoid glycosides and terpenoids (ginkgolides, bilobalides) and have been used pharmaceutically. Ginkgo supplements are usually taken in the range of 40–200 mg per day. Recently, careful clinical trials have shown Ginkgo to be ineffective in treating dementia or preventing the onset of Alzheimer's Disease in normal people.

---Ginkgo for memory?
Ginkgo is believed to have nootropic properties, and is mainly used as memory and concentration enhancer, and anti-vertigo agent. However, studies differ about its efficacy. The largest and longest independent clinical trial to assess Ginkgo biloba’s ability to prevent memory loss has found that the supplement does not prevent or delay dementia or Alzheimer’s disease. Some controversy has arisen over the conclusions drawn by some studies that were funded by a firm which marketed Ginkgo.

In 2002 a long-anticipated paper appeared in JAMA titled "Ginkgo for memory enhancement: a randomized controlled trial." This Williams College study, sponsored by the National Institute on Aging rather than Schwabe, examined the effects of ginkgo consumption on healthy volunteers older than 60. The conclusion, now cited in the National Institutes of Health's ginkgo fact sheet, said: "When taken following the manufacturer's instructions, ginkgo provides no measurable benefit in memory or related cognitive function to adults with healthy cognitive function." ... The impact of this seemingly damning assessment, however, was ameliorated by the almost simultaneous publication of a Schwabe-sponsored study in the less prestigious journal Human Psychopharmacology. This rival study, conducted at Jerry Falwell's Liberty University, was rejected by JAMA, and came to a very different—if not exactly sweeping—conclusion: There was ample evidence to support "the potential efficacy of Ginkgo biloba EGb 761 in enhancing certain neuropsychological/memory processes of cognitively intact older adults, 60 years of age and over."

---As you can see, the conflict of studies can cause confusion, but one must wonder what the motives truly are: The truth, whether it works or not? Or, how can we sell more products? And so on...

---More attention needs to be paid to Ginkgo biloba's other potential health benefits, such as:

Out of the many conflicting research results, Ginkgo extract may have three effects on the human body: improvement in blood flow (including micro-circulation in small capillaries) to most tissues and organs; protection against oxidative cell damage from free radicals; and blockage of many of the effects of platelet-activating factor (platelet aggregation, blood clotting) that have been related to the development of a number of cardiovascular, renal, respiratory and central nervous system disorders. Ginkgo can be used for intermittent claudication (muscle pain, generally in the calf, that occurs intermittently during physical activity/exercise).
Some studies suggest a link between ginkgo and the easing of the symptoms of tinnitus (constant ringing of the ears).

---As you can see, when it comes to the battle over whether this supplement can enhance memory or is it just merely a pretty tree, it is obvious that we should just let Ginkgo thrive as beautiful shade trees, at least to me. Think about it: This supplement most likely does improve blood circulation and is an antioxidant, etc., but what's so unique about that? Now, if you have a product to enhance brain power then wow(!), you have yourself a unique product line. You get my drift? Anyway, on to the side effects......

---Ginkgo Side Effects per Wikipedia:

Ginkgo may have undesirable effects, especially for individuals with blood circulation disorders and those taking anticoagulants such as ibuprofen, aspirin, or warfarin, although recent studies have found that ginkgo has little or no effect on the anticoagulant properties or pharmacodynamics of warfarin in healthy subjects. Ginkgo should also not be used by people who are taking certain types of antidepressants (monoamine oxidase inhibitors and selective serotonin reuptake inhibitors) or by pregnant women, without first consulting a doctor.
Ginkgo side effects and cautions include: possible increased risk of bleeding, gastrointestinal discomfort, nausea, vomiting, diarrhea, headaches, dizziness, heart palpitations, and restlessness. If any side effects are experienced, consumption should be stopped immediately.

---Ahh, the good ol' side effects section always makes you just wanna go start popping their product down your throat, right? Ha-ha! Regardless of all the health talk, Ginkgo biloba still makes for a very pretty tree...... 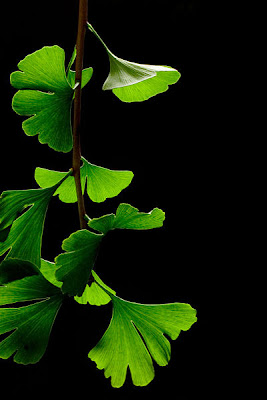 Posted by Obscurely Diverse at 4:45 AM