I'd say that most guys with an ample amount of testosterone pumping through their veins would like to walk around with large, broad shoulders and powerful deltoids. Ya know, it's one of those manly traits. However, since broad shoulders involve how large your frame is and how your bones chose to grow, you may be stuck with a less than desirable build - depending on your genetics. Although, even if you have an average or a narrow build, you can still appear to have broader shoulders by beefing up those deltoids. Below, I'll provide a few simple ways to do just that......

Image of the Deltoid muscles: 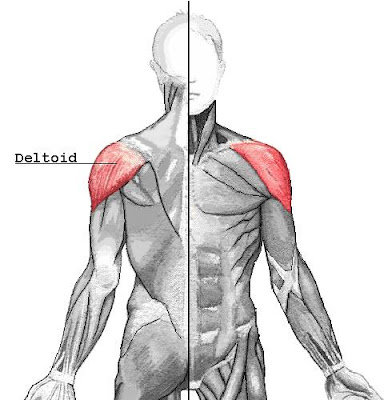 The shoulder contains 3 types of deltoid muscles: the anterior (front) deltoid, posterior (rear) deltoid, and the medial/lateral (side) deltoid.


A simple way to build up the front deltoids, is by doing any type of pushes and/or pressing motions, such as push-ups, bench-presses, etc. This is one of the easiest parts of the deltoid to strengthen, since the movements required to build this area seem more natural. *Side Note: This is also the type of deltoid that commonly becomes imbalanced from hardcore weightlifting and causes poor posture or a sort of hunkering over type look on some folks, and it's also known to make the shoulder more prone to injuries, etc. This generally only happens when there is a huge gap between the front and rear deltoid in muscular development, and so on.


A simple way to build the side deltoids, is by doing lateral raises. You can use dumbbells for this exercise. ...It is where you hold the weight by your side and then slowly raise you arm up to shoulder level, then lower back to the starting position. You can always alternate the lateral raises by doing them sideways and frontwards.
If you'd like to work the front and side deltoids using one exercise, I'd recommend the Military Press for building powerful shoulders and triceps. You can do these overhead lifts with dumbbells, but I'd also recommend using a bar. You can also alternate this exercise by lifting the weight up & down in front of your head and by going through the same motion, but behind your neck instead of in front.


A simple way to build the rear deltoids, is by doing lots of pull-ups and chin-ups.  If you're not very good with that type of motion, you can perform bent-over lateral raises to target the rear deltoids. Instead of using the standing position to build the side deltoids, bend over at the waist and, with a slight bend in the knees, hold this position while doing the lateral raises. Bent over rows, also work well. Reverse dumbbell flies is another great exercise for this particular muscle group. Just bend over, like when doing bent over lateral raises, and hold two dumbbells in your hands with your palms facing each other. Now raise your dumbbells backwards, until your arms are parallel to the floor. Or you can just buy a canoe and row, row, row your way to posterior deltoid success; ha!


Side note: The rear deltoids are often neglected, but they still get some secondary work from a variety of exercises that you use to strengthen your back, shoulders, triceps, etc. Personally, I focus more on the side and front sections of the shoulder muscles, mainly because there are more enjoyable exercises for those areas. [Update: A few years later I got big into pull-ups, so now I train my rear deltoids just as much as the side and front parts of the shoulder.] Besides, I'm not a big fan of bent over rows or anything that unnecessarily strains the back. But, if you're a hardcore bodybuilder, you're probably seeking a balanced build and you may have to go buy special equipment just for the rear deltoids that can perform reverse flies, face pulls using a pulley system, and so on.
Now, that's enough talk; go build ya some powerful, manly deltoids...

---End of Post "Simple ways to Build Powerful Deltoids..."
Posted by Obscurely Diverse at 6:52 AM