Introduction to the Speed Bag 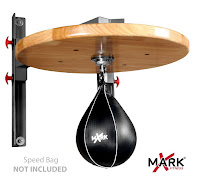 This fun little training device known as the speed bag, is something that many boxers, martial artists, physical fitness fanatics, etc., enjoy using. I've owned one in the past and although I enjoyed using it from time to time, I couldn't help but think how overrated this thing was. I mean, in a thumbnail, the speed bag is often promoted for increasing your punching speed and stamina while also enhancing your eye-to-hand coordination. Some advertisers often tout that this type of workout somehow builds up your upper body strength, which is a miraculous joke, by the way.

I hope, for the ones that are interested in boxing or martial arts, that many of you are seeking alternative options for speed bag training. If so, I'll provide a couple quick options for you in a moment. But first, lets analyze the uselessness of the speed bag, before we go any further. Okay, first up is the common strikes that are used to create that beloved tap dancing sound you get when everything is in sync and are really looking like a Pro while using it. Yes, I've been there and have impressed a few friends that witnessed me banging this little speed bag thingy into submission, all while tap, tap, tapping my way into a fictitious appearance of a voracious fighter on the loose.

Lets get real, for starters: The common motion for a successful speed bag tap dance, is not even related to the punches that you'd use in a real fight. The most common strike applied, is a downward, sideways hammer fist, if you will, which would make you look retarded in a real-life event. If you are unsure of what I'm speaking about, I'll provide a video below. Before watching that video, please note, that this guy does acknowledge some of the common screw-ups that are involved during a typical speed bag workout, but yet, even though he tries to give validity to this particular training device, it still looks totally useless, in my opinion. This sucks for me, by the way, because I was always really good at using the speed bag in a speedy fashion. I also totally look like an expert when I use a pair of nunchucks, too, but so far it hasn't paid any of my bills; ha!


After viewing the speed bag in action...

After watching that quick video, you should be able to notice that, even when used correctly, it really doesn't involve any realistic value for a fighter, although it has been used for many, many years - especially by professional boxers. If anything, the average user will develop terrible form and many bad habits upon extensive speed bag training. Now, if you are somebody that just uses one for the fun of it, hey, why not? However, there are several alternative options, many of which will actually enhance your skill, speed and strength. The first example is shadow boxing, but not just with your hands. By using weighted gloves while shadow boxing (punching in the air, more or less), you will accustom yourself to going through the motion of realistic punches like hooks, uppercuts, jabs, and so on, all while having added weight on your hands. This, in turn, will increase your speed and power. Plus, it does somewhat give your deltoids and "lats" (latissimus dorsi) a nice workout after you have punched for several minutes with weighted gloves. It also acts as a nice supplement to your main workout, for example.

Next up on the alternative options for speed bag training, is a body opponent heavy bag. If you are interested in that, visit my post entitled "Human-shaped Dummy - Punching Bag for Training," to get a better idea of why that particular heavy bag alternative is good for technique, power, etc. Now, there is another product that has been on the market for a long while that is called a "Double End Striking Bag." Just to save time, if it's really eye-to-hand coordination that you are seeking, you'd be better off hanging a tennis ball on a string and try to follow it as it sways all over the place, but even then, you are merely trailing a tiny ball with little baby jabs - which is extremely far from a real life event, to say the least.

Bottom Line: Anybody that knows anything about boxing and/or mixed martial arts training, will tell you that a speed bag is more or less used as a cool down exercise after you have finished your primary workout. Sure, it looks cool and all that, but the speed bag is actually fairly worthless, in my opinion. Once again, if you are seeking the best alternative options for this overrated training device, I'd go with a pair of weighted gloves while shadow boxing, any day of the week. If you are doing this for the sport: train hard, think smart, and don't waste time on anything that doesn't help you progress, such as a silly speed bag. Then again, I could just be mad because I can't have a speed bag/heavy bag stand anymore, since I moved to a location that doesn't have the room for such things; ha!

* Click Here for a fine Selection of Weighted Gloves *