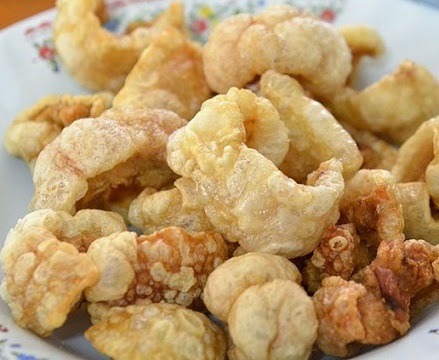 I'm sure most of you that has ever consumed store-bought pork rinds have seen the following under the nutritional label: "Not a Significant Source of Protein." Even though they may list 6 or 8 grams of protein or whatever, they will say that it is not a significant source. A long while back, possibly before the Internet, I remember reading about the source of protein in these pig skins. If I recall correctly, the protein actually comes from the structure of each hair follicle within the skin, hence its insignificance. It is not a protein that the body uses very effectively nor is it a balanced full chain of amino acids nor does it have enough value to even be called a partial source of amino acids.

It is somewhat trivial, though. I mean, who in the hell is going to try to live off of freakin' pork rinds? It is like, "Hey, my new diet consists of pork skins and water. Here's another pig skin to good health; cheers!" LOL! But anyway, the Internet is full of preposterous ideas when concerning this subject. In fact, some idiots, oops, I mean folks, actually think that the label is wrong and that pork rinds are actually a fair source of protein.

Out of all the pages I looked at online, I only found two statements on two separate forums that was halfway accurate. One of them said that pork rinds are not used by the human body, albeit even that isn't correct! They have a lot of selenium, trace elements, etc., and they are a source of energy/calories. One of the best comments was on a bodybuilding forum, in which this was stated: "The type of protein in pork skins is called collagen, the same substance found in hair, fingernails, and hooves. Its bio-availability is almost non-existent, hence the statement on the package." You can read more from that forum, here: forum.bodybuilding.com/showthread.php?t=848935&page=1

But just calling it collagen doesn't really answer the question for most people. Collagen is very important to the human body and the protein structures therein. Collagen is also essential to the function of connective tissues. However, your body supposed to make this. In fact, Vitamin C plays an important role in the production of collagen, but that's another subject entirely. On the other hand, if you can understand that eating hair and fingernails would not be a significant source of protein, you will start getting a better idea of what's going on here.

After skimming through the World Wide Web, I like the more succinct answer that I've known for many years (the one stated in the first paragraph) much better than all the senseless chatter I had to endure while perusing random websites. At any swine-filled rate, I like store-bought pork skins on occasions, but I've never had the chance to eat the rinds that were fresh from the farm; cheers!

Random Blog Post: Creatine is a waste of money - for most people!
Posted by Obscurely Diverse at 6:00 PM